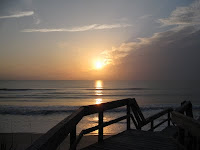 This time of year, the end of August, just five days from Labor Day weekend seems like it fits that quote. It falls between summer and winter, between the carefree days of summer and the start of a new school year, between health and illness, between life and death. It is a time to reflect back, to look forward. I know this is usually done in January, the month named after the Roman god Janus who had two faces, one to look back and one to look forward. But there doesn't seem to be real change on January 1st. All the changes are arbitrary, man made. Summer to autumn is a change that has been going on for a long time. It's time to revel in the last days of the growing season, to enjoy the warmth, and it's the time of harvest, the time to prepare for winter, and it holds both seasons close.

I have watched a little this weekend of the memorial services for Edward Kennedy. The passing of the last Kennedy son of his generation is a time marker. I've not followed his career much, but knew of some of his problems from news reports. Yet I heard a report during these last few days that I had not heard before. We had all heard about Chappaquiddick, but how many had heard of Jessica Katz, a little girl dying in a Russian hospital, that was brought to the US through Kennedy's intervention? She's now working in New York to help find homes for the homeless. There was bad, but there was also good. And so the story continues.
My extended family lost Cesar, the cocker last year, Scooter the beagle mix in February and Abby the yellow lab in July. Cesar was the only dog I know who would beg for salad. I remember when Scooter was a puppy and came to visit, still sporting her little pink stitches from being fixed. I will always remember Abby picking up all five dog bowls after dinner during a family get together in San Antonio. And while it's sad, there's joy, too, to meet the new additions, Shiraz the beagle/Brittany mix, Belle, the new yellow lab puppy, equipped with sharp puppy teeth, the energy of youth and the attention span of a fly, and Ziva, the rescued poodle puppy who is a scaredy-chicken but is as cute as a button. There was bad, but there was also good. And so the story continues.

Walter the pug was injured last month, still struggles, goes to therapy, trying to get whole again. But in that time, how much good have we seen? The healing blanket, the Indy bloggers package, the latest package from Loren, all the good wishes and support for someone most haven't met. There was bad, but there was also good. And so the story continues.

We are ready to flip the calendar to a new month, just like changing from one day to the next. This is a time of change. A chill is in the air (okay, it's not supposed to be in the 50s in Chicago in August, but that's a whole other story!), new notebooks are in the stores, football preseason is in progress. This change doesn't have to be in the superlative. It doesn't have to be the best, or the worst, but most things in life seem to be a little bad and a little good. And maybe we really can't know the good, appreciate the good unless we also know a bit of the bad. It makes the good just a little bit sweeter. And so the story continues.
Posted by dw at 6:03 PM 4 comments: 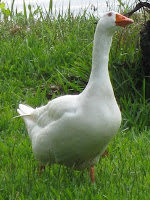 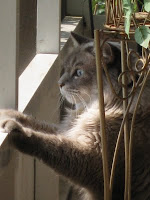 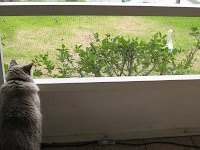 Birthdays, Gotcha Days, Every Day is a Celebration! 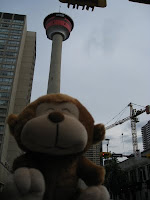 Today is a friend's birthday. I have talked to her for 8 years, but met her in person for the first time last summer. I know she's most likely doing something with her family today, but knowing her, she's doing the work, the hard stuff. That's just the type of person she is. But it's still a day to celebrate her arrival into this great big world, and even though it's not an anniversary of when we first "met," it's a good day for me to acknowledge how much better my world is because she came into it 8 years ago.

So isn't every day a celebration of sorts? Isn't there something special you should be remembering? It doesn't have to be the exact birth date, or gotcha date or anything. Those are just our time markers. But they provide us with a moment to remember to celebrate the joy, the friendship, the love that is there all the other 364 days of the year, too. It's that joy and friendship and love that sometimes gets lost in the every day world (grocery shopping, laundry, running here and running there, obligations and registrations). So we take that special day to remember and restore and refresh. It takes special days like this to make our life whole again. In between all of the bad things that go on in the world and all the pain we see, it's the good points we focus on that make all the difference.

Can't But Make You Smile!

Have you seen this picture of the squirrel who popped up in a couple's Banff vacation pictures? They had set up the camera on a tripod and the guy then got in the picture with the girl, and began taking pictures. They had one of those little remote clickers and took a few pics of themselves when the little critter got curious and checked out the camera and then popped up just as the camera clicked. Now there's a whole slew of pictures with this photogenic little guy! Go squirrel crasher!!
Posted by dw at 7:45 PM 2 comments:

I Hold You In Contempt

I have often felt that so many people today are unnecessarily mean. I'm not talking only about heinous crimes such as murder or animal cruelty, but the average everyday things people do that they really shouldn't do in a civilized society. You've seen it, I'm sure: the person who cuts you off in traffic because he refuses to wait his turn, the parents at the holidays pushing and shoving and potentially hurting someone in a rush to get a scarce toy, the check out clerk who talks to the clerk at the next register while ringing you up and totally ignores you. These are not exactly crimes you'd jail someone for, but you'd sure like them to act a little better.

I bring this up because yesterday's paper had a column that started out about a judge who held a court spectator in contempt because he (the spectator) yawned loudly. This judge apparently has the highest rate of finding people in contempt in the county. Maybe this shows that the judge "goes too far in pursuit of order in his court. Or maybe they are evidence that [he] is an admirable defender of civility inside one of our most important institutions."

The author of this article, Barbara Brotman, who also writes the outdoors column for the paper (with some good hiking ideas in the area!), wanted in on this action.

"That driver who forced me onto the shoulder as i tried to merge into his lane on the Eisenhower (expressway)? You, sir, are in contempt of court!

"The people yakking through an entire Grant Park Orchestra performance in Millennium Park? Comtempt of court!

"The owner of the SUV hogging two spaces in a packed parking lot? Contempt!

So are we lacking civility as a society? Have we become so narcissistic as to totally ignore the impact we have on others? Are our lives so busy that we can no longer take the time for small acts of courtesy to strangers?

I would like to think that I see the positive side of people, that there are just a small percentage of people who are mean and nasty and uncivilized. But every once in a while I think it's all going to hell in a handbasket. (Were DID that phrase come from!?) Then something happens, something positive and good and uplifting.

There's better people out there than maybe this city girl would think, sometimes. There are still those for whom the word civility isn't obsolete. And maybe being held in contempt wouldn't be a bad way to make sure the rest get the message. Either that or have them write "I will not be mean" 1000 times!
Posted by dw at 3:16 PM 2 comments: 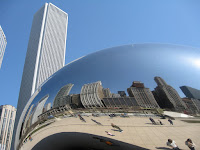 Yesterday I walked to the lake in time for the really cool acts in the Air and Water Show. I got to see a coast guard helipcopter doing a water rescue, got the daylights scared out of me by an F16 flying directly overhead, loud, fast, and smooth, saw the Thunderbirds doing incredible fly bys. I saw a lot of cool planes, got a little toasted, walked home, ate, showered and crashed!

Off to the Woods

Later today I'm driving off to Madison, Wisconsin to meet a friend for a nice dinner tonight, and then a bit of hiking tomorrow. We'll be hiking in Dodgeville, Wisconsin at Governor's State Park.

I live in a big city, surrounded by brick and concrete, with traffic noise and people noise. Most of the time it's okay for me. It makes me feel less lonely to know there are other people around. Even the thump thump of the guy upstairs when he's home is reassuring. But sometimes, every now and then, it's nice to get out and enjoy some peace and quiet, away from the bustling crowds, away from the noise, away from the city life.

Out there, in the woods, is nature, what the original explorers first saw when they came to this big continent. Oh, yeah, it's been moderized (thank goodness there are bathrooms, however rustic, in the park), and non native plants and flowers are found, but it's vastly different from the view out my windows and I'm going to enjoy a little change of scenery for a day or so.

Still I know coming home will be sweet, as it always is when traveling. It's not that I haven't enjoyed getting away, seeing other things, tasting other flavors, but home is...well, home. But it's good to refresh, to refill myself with what's out there. And so a "nice trip to the forest," will recharge my batteries, refresh my soul and yes, make me yearn for home, and my couch and my fridge, but it will also make me a better person, better able to face another week!
Posted by dw at 9:16 AM 2 comments:

A couple years ago, there was a "Life Appreciation" meme-like thing going around here, so I thought I'd bring it back once again. Life gets busy and we forget the little things that can make us smile, that can make us forget the bad things in life, that can make our day brighter. So for today, post about nature, something recent that made you smile, that amazed you, that made you realize there's more to this silly world than your work-a-day life. It can be a story, a picture, both, whatever you want it to be.