This past Monday, August 19th, was this little girl's first Gotcha Day! It's hard to believe that one year ago, on a Sunday morning, I went to Animal Care Center near downtown Chicago to meet and adopt this little girl.  She had been brought up by One Tail at a Time from southern Illinois where she apparently had been dropped off with her brother and sister.  The rescue named them Laney (now Riley), Lucy and Lenny. 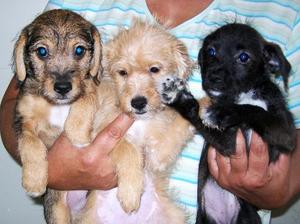 Riley weighed all of 5 pounds when I brought her home, stopping at first at PetSmart to get food and a bed.  She's now a 13 pound beastie!  Both of her siblings were adopted, too!  Her brother was adopted just before I walked in to meet her, and her sister was adopted within the next couple of weeks.

In this year we've both learned a lot, and grown a lot and traveled a lot - Riley has made two trips to Fort Wayne, IN, one trip to Florida and one trip to northern Georgia all to meet family; and she's been boarded at PetSmart twice so I could go to Rochester, NY and Madison, WI. She's still as sweet as she was when I first met her and she climbed on me like a mountain goat, though the terrier comes out when she plays.