Day Two Trying to Get a Schedule

Hi there, Rainy's mom here. I want to tap the vast knowledge of all the pug pawrents out there for some advice. I know this is only day two at home (well, really it's just been 24 hours now) and I know that coming into a new situation there will be housebreaking issues. All that said, I don't know what the best way to housebreak Rainy. She's a year and a half and has had housebreaking issues before. Yesterday she pooped twice inside, both times by the gate I have set up when I was out of the room. This morning she peed in the same spot, on a towel that was there, again, she started when I was out of the room. Then after a half hour plus walk -- where she sniffed everything, butt sniffed a couple other dogs (quick Rainy note here, Pierce the Boston was real cute, but he was bigger than me and I was a little scared of him; but his butt sure smelled good!) but didn't poop or pee, I crated her so I could take a shower and she pooped in her crate, just one piece, but with part of it pushed out through the wire (yes, I switched to a wire crate so she could see me better; bad idea?). Apparently she didn't get the memo that dogs don't dirty in their crate (and yes, there's no extra room to have a separate potty section of the crate). I've taken her out on the balcony several times and stood with her, but she only peed out there once and that was yesterday. Any suggestions or ideas on how I can get a handle on this to know I'm at least starting to do the right thing? I know puggies can be stubborn, and she certainly is, but I know they can be housebroken.....at least most of the way? I want to be a good puggie mom to her, but need some assistance from the voice of experience! Thanks in advance! Woof bark, I want to be good for mom, really I do! Thankie for advice to help my mom!

(Just a note, Rainy was good last night in the plastic crate. She whined some but then quieted down and only got restless when I got up to go to the bathroom at 5:15. I took her out to the balcony, but she didn't do anything and she then went back into the crate for another couple hours with just a little whimper and then she was fine until I was getting up.)
Posted by dw at 12:53 PM 11 comments:

A Day of Very Strange Things 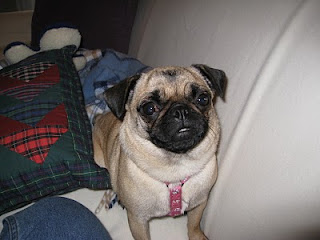 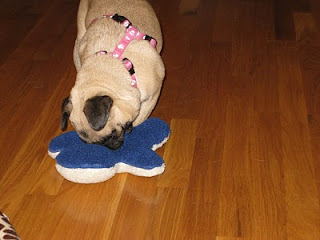 Hi there, Rainy here! It's been quite a day! First off I was just barely starting off the day as usual, with Taz, and Jasmine and Mia, the other puggies in my foster home, when a visitor arrived, only she wasn't a visitor to me! She was my new mom! After a short time, we got in the car for the 70 mile ride (mom told me this because I's got no clue what the heck a mile is, much less 70s of them). I didn't want to sit in a carrier for the way home -- no, I wanted to sit on mom's lap and help her drive (watch out for that big truck mom, even I can see that!). Finally I settled down and curled up on the passenger's seat while mom drove home. When we finally got home, there were so many strange and new things to get used to. We went into this door that opened by itself and closed by itself and made my tummy fall. Then we went into this strange new place that mom said was home. I checked out every nook and crannie that I could get to, just sniffing and snorting and being so excited. There was a comfy couch I really like and a couple of new toys that I don't have to share with anyone else! Mom went beyond the gate that was up and I couldn't see her and I cried. Then I pooped (oops!). I's was real excited I guess. Mom took me out to the balcony and I peed there like a good puggie, though I missed the pee pads and peed on the tarp. We watched something on Food Network and it looked mighty good but I also napped through that. Then we went out for a walk, and I met a guy who was just standing outside and he scratched my neck and said he had two puggies and couldn't sleep without one of them snoring at him. There were so many new smells and sounds! I've never seen the big city before! Then mom put me in my crate for hours and hours and hours! (Mom's note, it was 10 minutes) but after I got sprung, I got dinner! Then I got crated again when mom ate her dinner. Don't know what that's all about! Anyway, I think there'll be a few more "outside" times on the balcony yet tonight -- I did find it was a great place to people watch! -- and maybe a nap on the couch. Mom's gonna try to crate me for the night, but I'll probably just whine and cry and she'll cave. Anyways, I's heard all about all the blogging pups my mom's found and I made her help me do my very first bloggy thing (not really sure what a blog is, but maybe it'll be tasty!). Nice to meet you all!

The Getting Ready for the Puggie Question Thread

Hi folks. In just a few days little Rainy will be in her forever home! I'm so excited to get her and love her and hug her and kiss her...but I have questions that I can probably figure out but thought I'd put out there to all you experienced furparents.

First off, there's the question of a crate. Now I've read that the crate should be big enough for the pup to turn around in and be comfy in, but not big enough to set up a separate potty area in. But that begs the question.... plastic or wire?

Second off, I've got a balcony that I'm going to set up as a potty area for her, using puppy pads. Question is how to hold them down! See, this is the "Windy City" and the last few days have indeed been windy! I've looked at those "holders" at Petsmart, but they are quite small and fairly lightweight, too (would take off from the balcony like a kite!).

I know I'll think of more, but even though I'm very excited to bring her home, I also want to do the right thing for her, and the sane thing for me! Thanks in advance for any suggestions!
Posted by dw at 4:38 PM 10 comments: 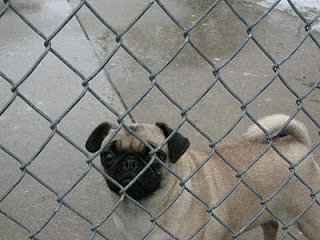 Today i went to meet Rainy. That's the name she was given and I think I'll keep it. She's a really small pug, only 11 pounds, but she is all pug. The foster has three other pugs, two somewhat active adult females, Jasmine and Mia, and one hospice male, Taz. All four greeted me at the door. Rainy held her own with the bigger pugs, though Taz, the biggest, moves rather slow and is deaf so didn't put up much of a challenge to her. She's incredibly sweet, giving lots of kisses and sitting in my lap and next to me for most of the hour long visit. She played with the other two girls, grabbing at a stuffed toy with them in a tug of war game. As I was leaving, she wanted to come with, following me to the door, and then, after taking care of business in the yard, followed me to the back gate. This week I'll be getting her crate and food and next Saturday will go out and bring her to her forever home. Say hi to Rainy.

This Saturday, I'm taking a ride out to the wilds of Illinois to meet a two year old little pug girl. Since the fosters are available only evenings during the week, I'll most likely bring her home the following Saturday. I think it would be better to bring her home during the day so she can have a bit more time before bed to get used to her new digs. I'm planning on using the week between meeting her and bringing her home to get supplies and get ready for her. Once I meet her, I'll know better what size crate to get for her, what size harness, what toys she might like. And I'm also considering various potty options for the balcony. Once she's here, there'll be training, playing, walks and all sorts of fun, but for now, I'm trying to figure out everything I'll need to make her comfortable in her new home. Any suggestions, comments, ideas would be appreciated. :)
Posted by dw at 5:10 PM 18 comments:

Martini was dressed for the holiday. And so was Ziva. And all the dogs seemed happy with toys and play and food (oh my!). 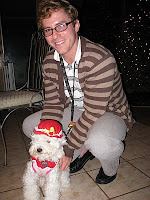 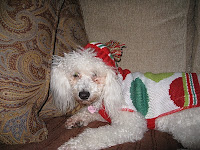 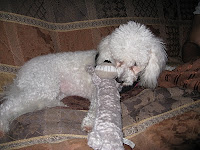 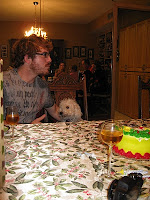 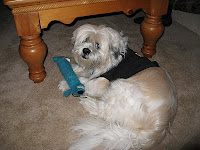 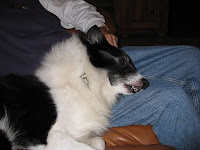 Ben had milk and cookies ready for Santa, and then on Christmas day, presents were opened. 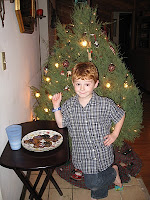 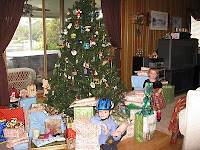 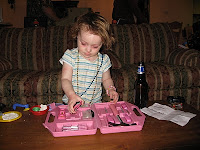 Ava was not sure about this whole Christmas thing. 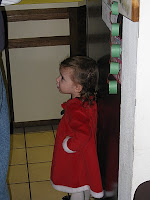 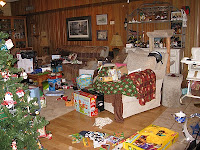 Thoughts on the New Year

There are times:
To hold open a door.
To surrender your seat.
To thank someone, in writing.
To let bygones be gone.
To remember your parents.
To listen with care.
To surprise with a gift.
To mind your table manners.
To honor tradition.
To give voice to your heart.

May this New Year be filled with times like these!
Posted by dw at 4:29 PM 7 comments: