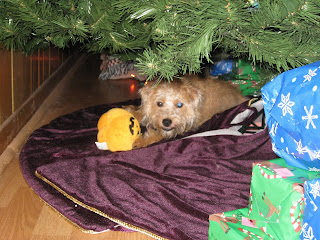 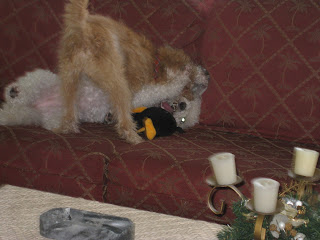 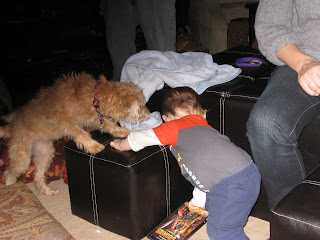 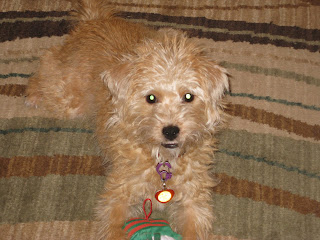 For Thanksgiving this year, Riley took her first road trip - to Fort Wayne, Indiana.  She enjoyed playing with three of the four dogs at my cousin's house - a big yellow lab, a black lab mix who was smaller than the yellow lab, and a Brittany/beagle mix (Jack the pit bull didn't play - he's 13 and just showed up for food and treats).  Though she was by far the smallest dog in the house, Riley held her own with the big dogs, scooting under a chair when things got too much and conducting 'sneak attacks' from her safe place.  We were home for a few weeks and took off on a second road trip.  This one was just a bit longer - to Florida! I was concerned about driving alone with the pup, knowing I'd have to leave her in the car alone when I made a bathroom stop, but she did great.  She traveled in the back seat in her crate and slept or chewed on her nylabone.  She did great when I left the car, not crying or barking when I left (as far as I knew) or when I got out to pump gas.  We spent the night at a hotel I've used before in northern Georgia and except for way too many trips outside she did very well.  She would stand by the door to go into the hallway, so of course I took her out, but I think she mostly wanted to go see the people she could hear and smell.  She's most definitely a people dog.  In Florida she got totally spoiled - my cousin leaves soft dog food out on the carpet for their poodle who is a bit neurotic and is afraid of her food bowl and Riley found that and gobbled it up.  There was also a plate of food down for the poodle of real food which Riley just nosed herself to and ate - the poodle was just too slow.  That didn't set them off on a good start for the visit, but they figured it out in a day or two and enjoyed playing bitey face and getting worn out.  Riley also got her first taste of off leash outside when my cousin's husband took all the dogs out.  She followed the poodle around so all was good.  Now we are trying to get back to normal, but I've had to buy some of the soft dog food they had even though it's not puppy food - she will eat a little of her puppy kibble but loves the soft food.  I guess like everyone else, Riley enjoyed the holidays and now has to get back to everyday life.
Posted by dw at 12:11 PM 9 comments: