For Benny - Hugs and Kisses Day

It's a Hugs and Kisses Day for Benny from Two French Bulldogs. Lily and Edward would like you all to join in! 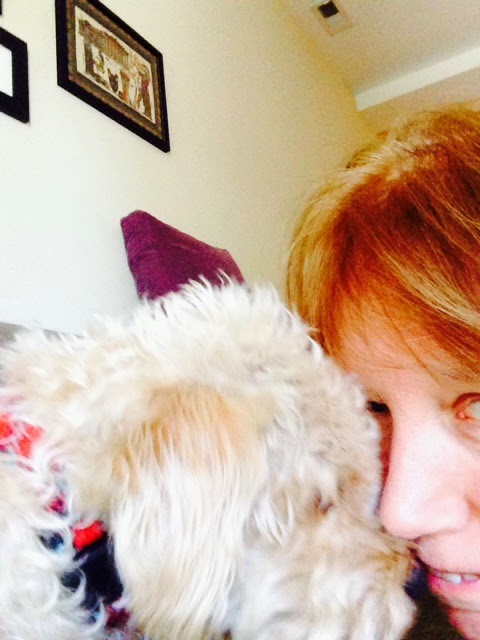 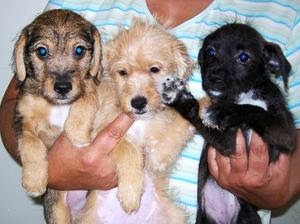 Two years ago today I made a decision to adopt a little beastie who was named Laney by the rescue.  She was three months old and weighed all of 5 pounds!  She looked different from her siblings, as you can see by this picture which was on the Petfinder profile of her sister, Lucy (the little black pup). Along with her brother Lenny, they were listed as Poodle-Wire Haired Terrier Mix.

I brought her home, named her Riley and life's been an adventure every since!  We went through housebreaking, puppy teeth and puppy shots and an Indiana road trip by the time she was 6 months old.  By the end of April she had made a two day ride in the car down to Florida and was boarded for the first time.  Since then, she's traveled a few more times to Indiana and Florida and has been to northern Georgia both summers, she's welcomed company and has learned to snuggle in bed with mama, and that when the Game of Thrones theme starts, she's in for snuggle time on the couch.

Yesterday she got a Kong Wubba that she played with and today we walked over to Kriser's and got a selection of treats, including a treat bag they gave us when I mentioned it was her Gotcha Day.

So Happy Gotcha Day, baby girl!  May the adventures continue! 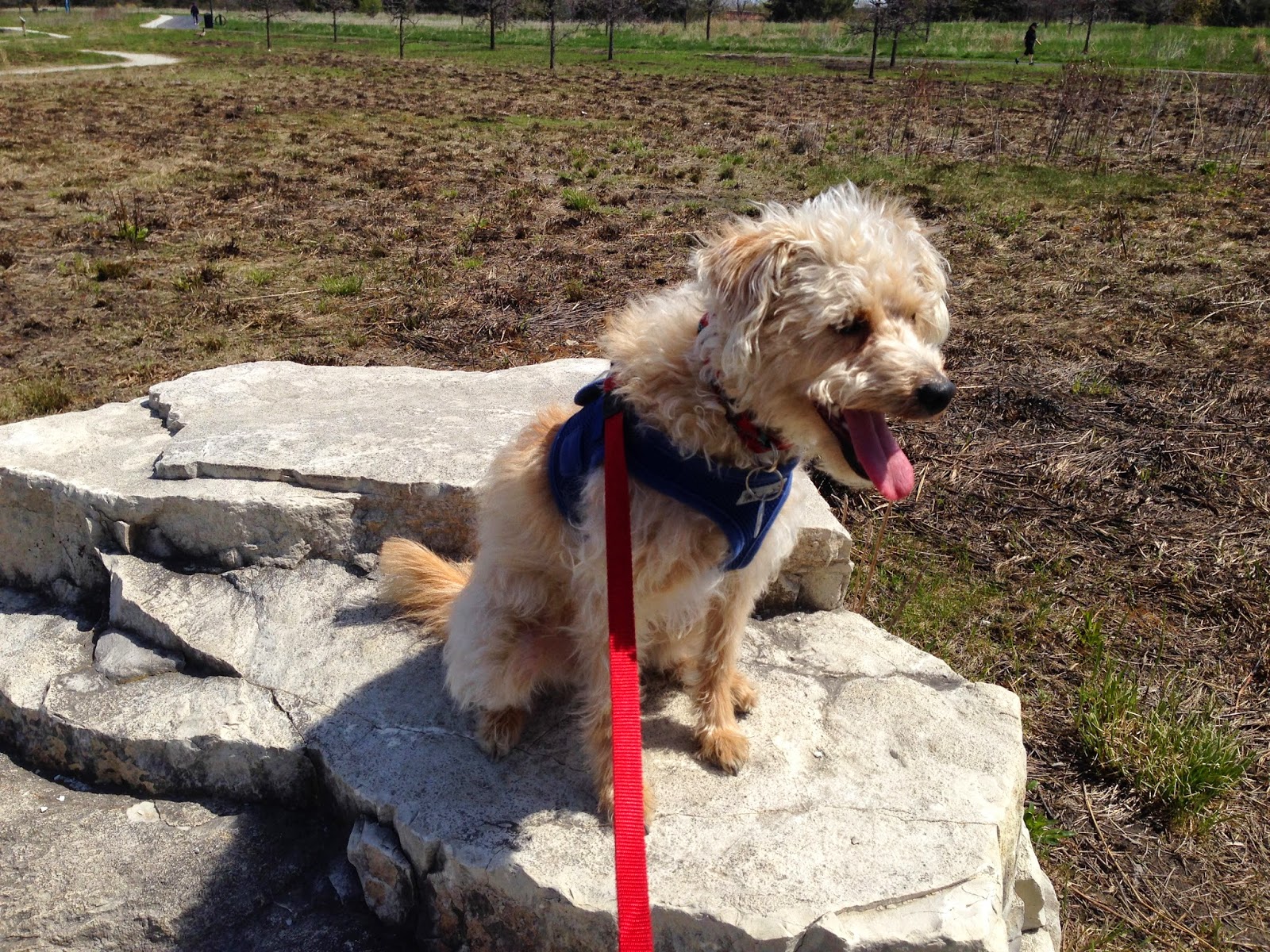 This weekend a very special blogger friend is celebrating a very special birthday.  That's right! It's Sugar and she's lucky 13 years old!!  We got to meet Sugar in the fur this week, just in time for this special weekend!

Happy Birthday, Sugar, with smiles, from your friend Riley!

A Morning at The Glen 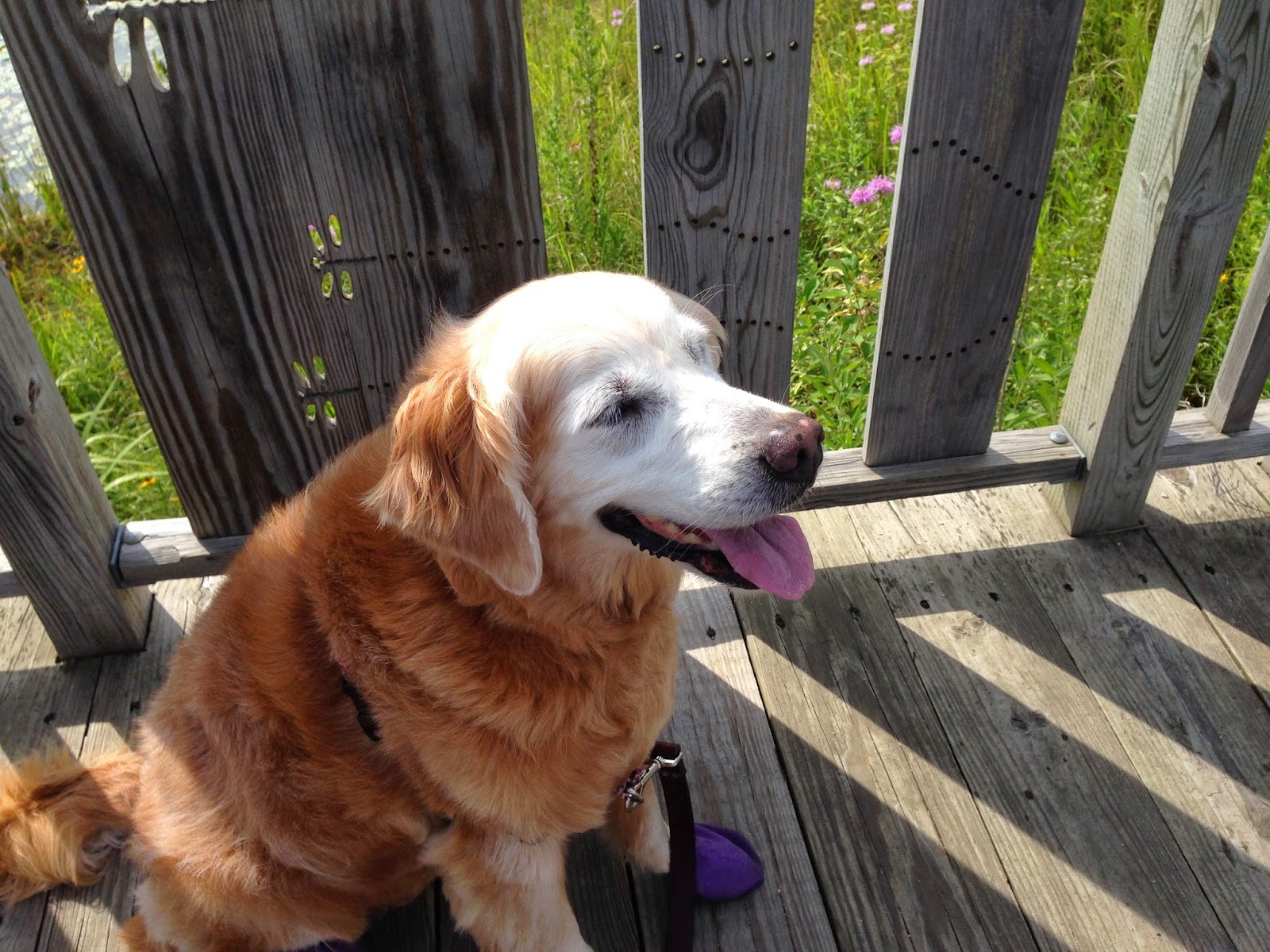 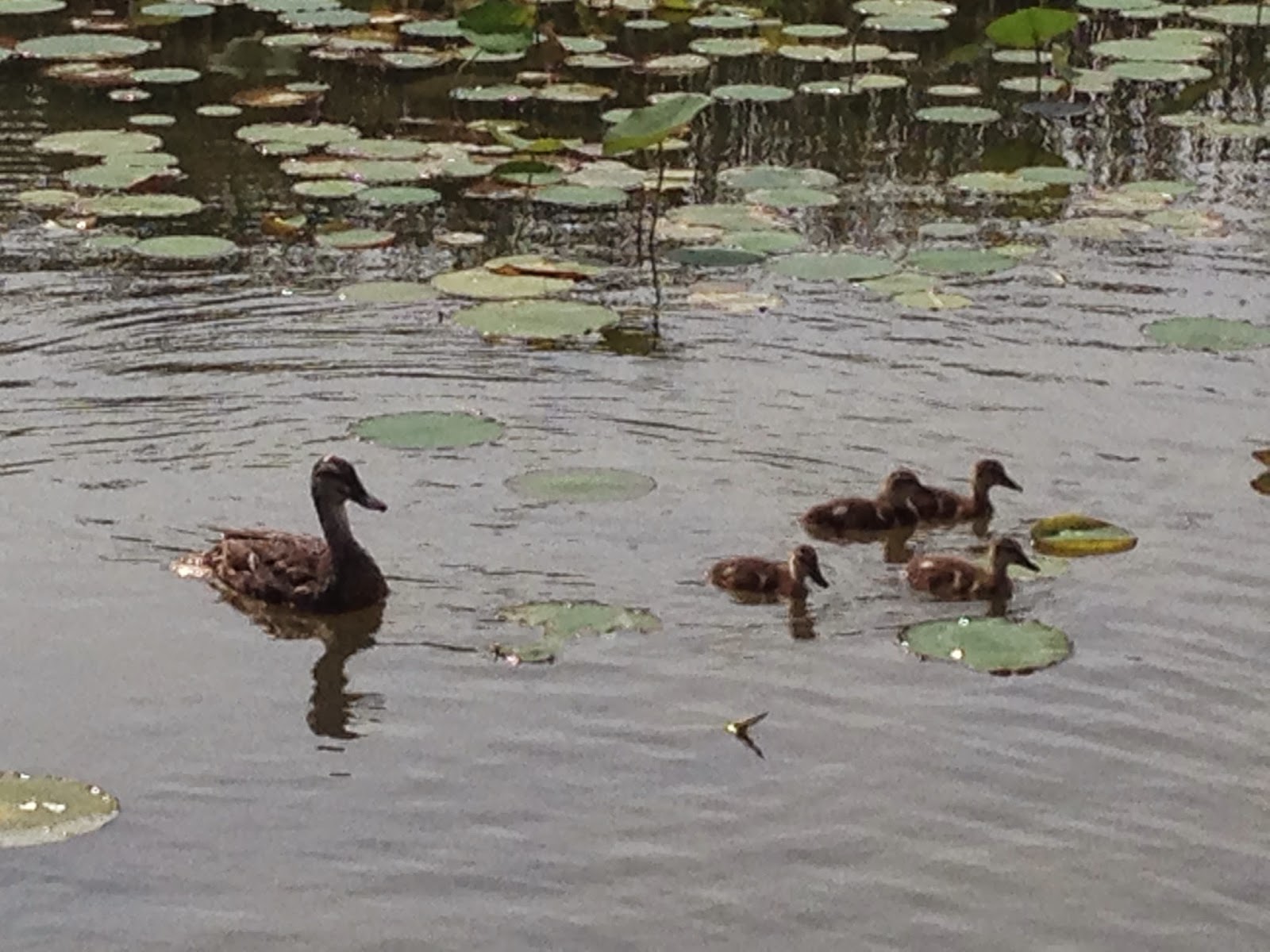 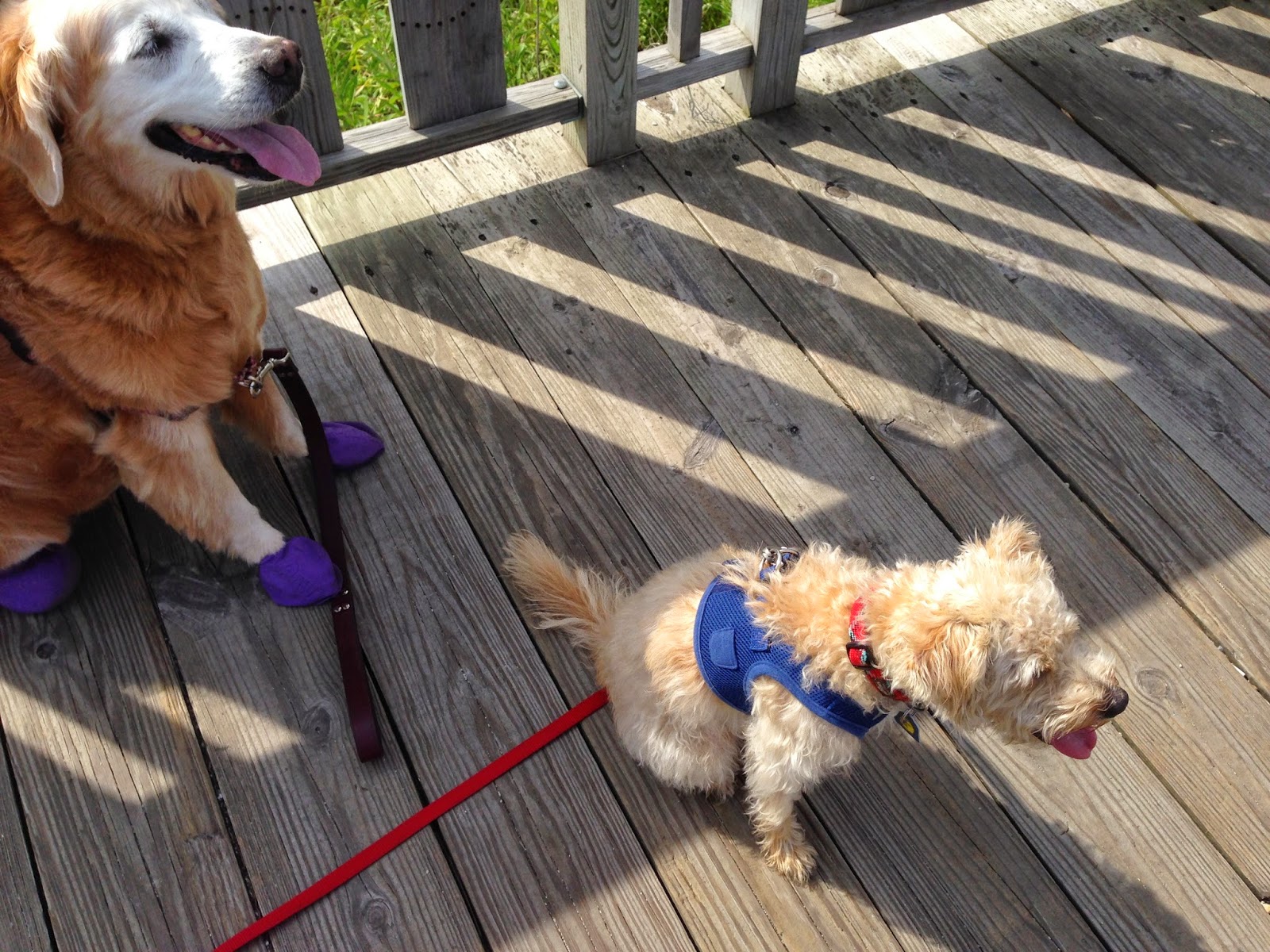 Yesterday morning Riley and I got into the car and drove north for a little bit to 'The Glen' in Glenview.  We were going to meet up with one of our blogging friends, Sugar!  After arriving just a little bit early (we weren't sure how bad traffic was going to be), Riley wanted out of the car.  We walked around by the stores a little and by the fountain with the Navy statues.  Riley was a little confused because while these statues looked like people, they sure didn't smell like people.  I told her this was to honor the Naval aviators because this whole area used to be the Glenview Naval Air Station.  Before long a car pulled up and there was our blogging friend Sugar and her mom!! After some initial sniffs, we all walked together for a while.  We saw a family of ducks and some Canadian geese and some real nice lilypads that Sugar's mom said looked like a Monet painting!  The park area of the Glen is pretty, with a real prairie feel.  You can even see some of the nice little touches behind Sugar - there are cut outs in the wood in the shape of dragonflies! Riley and I had been to the Glen once before after finding out about it from Sugar's mom.  But we both agree it was a lot more fun to enjoy it with friends!
Posted by dw at 5:51 PM 5 comments:

We're doing this We Are Blogville thing that Murphy and Stanley posted about today.  Not entirely sure if we're doing this right - they said it's kinda like a big blog hop, but we've never done a blog hop before.  Anyway, we're supposed to say who we are, so here goes!

This little cutie in the picture is Riley. She's a two-year-old wire-haired terrier/poodle mix (at least that's what the rescue said).  She loves toys, especially the ones that squeak, and loves treat time.

I'm Riley's mom, Karen. We live in Chicago, love the Blackhawks and have a rather large book collection.

Happy We Are Blogville Tuesday!
Posted by dw at 8:05 PM 5 comments:

My little baby girl Riley is two years old today! It doesn't seem possible that she is two - I brought her home at 3 months old and a mere 5 pounds. We went through housebreaking, baby teeth, meeting other dogs for the first time, meeting a cat for the first time, first toys, first bed, first crate. And now my baby girl is all grown up - and has the run of the house! She's grown physically - she's now a whopping 13 pounds - and she's grown mentally, having been boarded for long weekends, stayed with a family member for two weeks while I was away, traveled to Florida and back a few times, traveled to Georgia and back a couple times and has traveled to Fort Wayne several times. Sometimes it's seemed like time went so slowly, but in reality it seems now like a blink of an eye.  I remember carrying her and walking back and forth telling her it was so hard to be a puppy because there was so much to learn.  And learn she has. She loves her toys, so I splurged and got her a soft tree trunk with three little owls for her to find. Gotta keep that little mind of hers sharp.  So Happy Birthday, little girl! It's been a wild ride, but a great one!  I love you big time, baby girl!
Posted by dw at 6:27 PM 2 comments:

A Pup or a Stuffie? 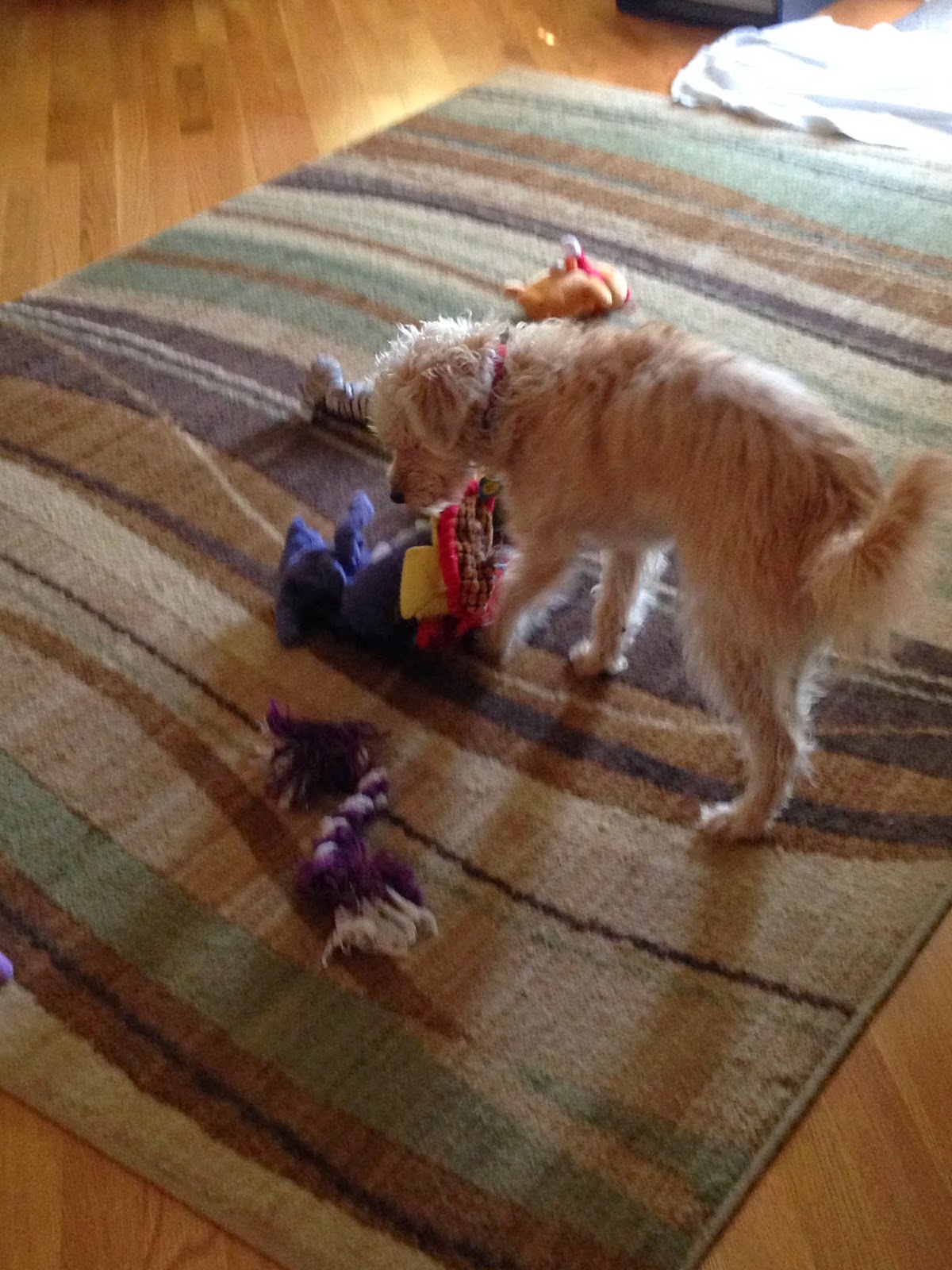 I found the original listing from One Tail at a Time on Petfinder.com for Riley (then known as Laney) and this is what part of it said:

Though Laney is an extraordinary snuggler (and kisser!) who enjoys being held, she seems to be the most independent of her siblings. During car rides, Laney loves looking out the window and taking it all in. Often confused with a stuffed-animal, Laney's cuteness is hard to rival.

Riley does indeed love her stuffed animals, some of which she destuffs!  So is she a pup or is she a stuffie?  I'm sure she wouldn't care what she was called as long as there was attention and loving to be had!

I've decided to make this blog Riley's blog.  My other writings can now be found at a second blog, Fracking Culture http://frackingculture.blogspot.com/

Please continue to come by here to read about the adventures of my crazy little pup, and please visit Fracking Culture for a look inside our times.

And for your pleasure today, here's a picture of Riley!