From Summer to Fall 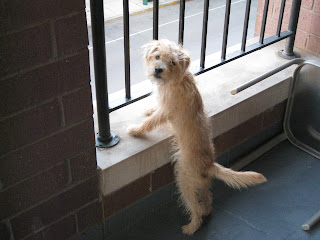 It's hard to believe it's almost October, almost that time when a chill hits the air, and Mother Nature paints the leaves so many pretty colors! And hard to believe that Riley has been here almost 6 weeks! She came as a 5.2 pound puppy and is now 7.6 pounds and has learned a few things at puppy class, learned a few things at home and learned a few things out on walks in the neighborhood.  Being in the city you wouldn't expect to find as many big dogs as we've come across.  Last week we met a man walking a Newfie and a Bernese Mountain Dog.  Two days ago we met a Saint Bernard. And we've met numerous labs, goldens, a few huskies and mixes that are bigger.  Riley doesn't seem to be afraid of them with two exceptions, both behind fences.  We pass a house with two dogs, a lab and a hound of some kind.  The hound puts her head through the gate rails but it's the lab Riley gives a wide berth to.  And just a couple doors away, there's a shepherd who barks and runs fast to the fence and Riley stays away from that one, too (though I met the owner who said both her shepherds are love bugs). 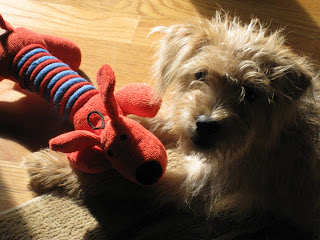 Riley has gotten used to the noises of the city, though loud bangs still startle her, and she loves to lay out on the balcony in the sun.  She's been pretty good on the balcony, just putting her paws up on the ledge sometimes just to watch the world go by, sometimes to bark at people or dogs walking by.  She's doing well with housebreaking, going potty on the balcony and on walks, and loves to play with her toys (she's got the 'go get it' part down pretty good, it's the 'give it to me' or 'drop it' part that is problematic!).


And I'm getting used to having a puppy around.  I am getting plenty of exercise with our walks, and have lost about 7 pounds since I have to also sneak snacks when I want something.  It's still a work in progress to get a good balance of puppy time and me time, but I'm working on it, and I hope the work I'm putting in with her now will pay off with a good dog as she grows up.
Posted by dw at 2:35 PM 9 comments: 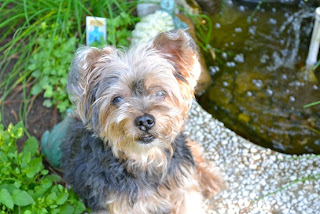 So I was checking some blogs and found that we're celebrating a very special pup - Pip! He recently celebrated his 15th birthday! Wow! We hope you had a wonderful celebration of a very special day indeed! Little Riley has a long way to go to reach that milestone, but we sure do hope there was some treats involved!
Posted by dw at 7:50 PM 5 comments: