The Times They Are A-Changin' But Oh the Possibilities! 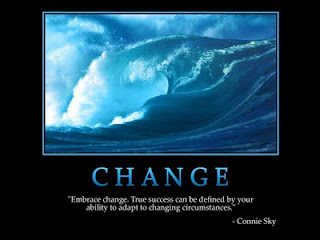 The other day I went to the bank to make a deposit, and couldn't help overhearing a conversation between an elderly woman and a bank employee. Apparently the bank has recently started charging for check images on monthly statements and the woman didn't understand how else she could get to see the checks that were paid. The bank employee, patiently trying to assist her, said her statement showed the check numbers that were paid; but I wouldn't see the front of the check, said the woman. You could always get a free picture of your paid checks through online banking; but I don't have a computer, said the woman. Change had come, and this woman wasn't able to handle the change.

Back when I was little, I remember adults talking about 'the good ol' days' and about how "things today just aren't the same." But things never can be the same. Change comes, life goes on; people adapt, even if they don't necessarily consider it progress. Maybe it's not quite as drastic as the Borg's message of Assimilate or Die, but change eventually has to be accepted, because change is coming whether you want it to or not, and if you don't accept it, it will roll right over you.

I was talking to a family member yesterday, and mentioned the last Harry Potter movie coming out in July. She said she was sad that the series was ending, that it wasn't going to be the same without a new movie/book. Wanting to hold on to something from the past isn't unusual, but before the Harry Potter series started, some other comfortable thing was coming to an end; some other comfortable thing made us sad that it was ending or going away or changing into something...else. And that opened up the way for Harry Potter.

Change comes. Sometimes we have a choice, sometimes not. What defines us, however, isn't the change itself, but how we respond, how we conduct ourselves, whether we allow change to bowl us over, or allow ourselves to roll along with the change.

I meant to post this the other day, the last day of April, since April is National Poetry Month. But, I guess I'm taking a different road, and saying that everything doesn't have to be done the way it's always been done. So, as a late acknowledgment, here's a poem about choices, and about not always doing what's always been done.

The Road Not Taken
by Robert Frost

Two roads diverged in a yellow wood,
And sorry I could not travel both
And be one traveler, long I stood
And looked down one as far as I could
To where it bent in the undergrowth.

Then took the other, as just as fair,
And having perhaps the better claim,
Because it was grassy and wanted wear;
Though as for that the passing there
Had worn them really about the same.

And both that morning equally lay
In leaves no step had trodden black.
Oh, I kept the first for another day!
Yet knowing how way leads on to way,
I doubted if I should ever come back.

I shall be telling this with a sigh
Somewhere ages and ages hence:
Two roads diverged in a wood, and I--
I took the one less traveled by,
And that has made all the difference.
Posted by dw at 12:03 PM 8 comments: